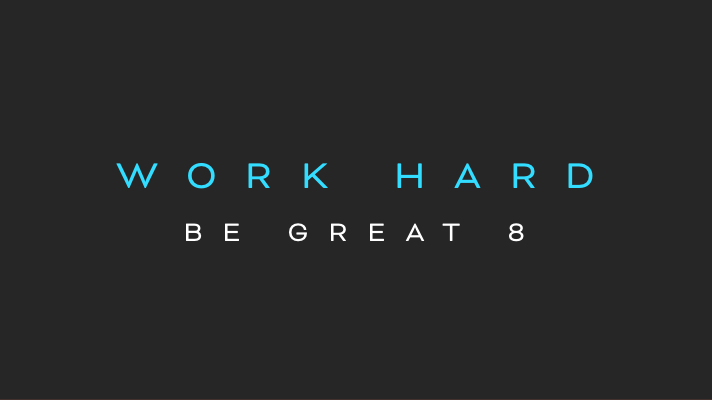 Are you the type of person that works hard no matter what?

Do you notice it more when you notice other people who don’t have the same work ethic?

Do you work hard when it’s hard to work hard though?

Sometimes it’s easy to grind things out when everything is going well. But what happens when things get rocky, you face adversity, and/or find yourself in situations standing alone against the crowd?

The prophet Isaiah stood out during his time. “The words he proclaimed were filled with warning, confrontation, and rebuke for God’s people due to their spiritual unfaithfulness. As a result, Isaiah was opposed by his contemporaries, those who needed his message most.” (The Jesus Bible)

It’s not easy to go against the grain when you’re in a dire situation. Therefore, Isaiah not only challenged the people of his time, but this visionary also offered hope. He assured them that God was still with them. He told them about the humble servant (Jesus) that would soon be sent and would suffer and die for the sins of God’s people. He relentlessly encouraged them to keep pressing forward.

“But those who hope in the Lord will renew their strength. They will soar on wings like eagles; they will run and not grow weary, they will walk and not be faint.” Isaiah 40:31

In the Christian faith, we all need a throttle man, or woman, a person who keeps us in line and forces us to step up our game and live up to God’s standards, not the world’s. For the people of Israel, Isaiah was their throttle man. Even thousands of years later after reading the words of Isaiah, the disciples and other bible authors, and most importantly Jesus, we still aren’t living up to God’s standards. We still need throttle men.

An important throttle man for me was my father. For the purpose of this Be Great 8 Devotional about Working Hard, I’m going to share an excerpt from my book Conversations with Gio. There are some really important things I learned throughout my lifetime about working hard and running and not growing weary. And many of them came, from my father.

I’m sure you can relate to all five of them.

On a cold winter night during my freshman year of high school, a sixteen- year-old neighbor lost her life. She was walking with traffic on a local, main road. A car slammed into her from behind. She didn’t even see it coming.

I do not recall if anyone actually told me, but I learned quickly to run against the flow of traffic during my high school wrestling days. Whenever I would head out for a training run, I would stay on the opposite side of the street. I preferred to dodge the cars coming toward me rather than trust that those behind would see me. My fate felt safer, wiser, and more controlled this way. Running against traffic on the road seemed easy. In life, it’s much more difficult.

It takes hard work. Thank God my dad taught me the value of it. He has always been a hardworking blue-collared, Italian man. This is a guy who has worked in a factory most of his adult life. Prior to that he worked in a grocery store and raised a family of four on minimum wage. Before he entered the family life, he served his country loud and proud as a sergeant for four years in the United States Marine Corps. I never saw him miss work or turn down overtime. I never heard him complain about it either.

My dad could have had more, but he made sacrifices for his family. He tells a story of his post-Marine days. He was able to get a job working for the Federal Government, but it would have required relocation to another state. My mother wasn’t having that, because it required her to leave family. So my dad declined the Federal job, and his menial job barely making ends meet, he accepted. Hard work became a necessity, not just a choice, for my dad. He proved that even if you don’t have much to show for hard work, you can’t get very far without it.

Here are some lessons my dad taught me about hard work:

1. HARD WORK IS NOT AN OPTION

There is no substitute for success. “The only time success comes before work is in the dictionary.” (Lombardi) Too often people look for the easy route. A six-year degree in one year, a six-figure salary in one month, a six-pack of abs in one day.

We see this mentality a lot in the fitness world. People want results, but they’re not willing to put forth the effort to achieve them. If takes time to get it, then it’s not worth the time. But don’t let this world fool you. There’s no quick and easy fix, there’s no magic pill, there’s no overnight success story.

Your mom and I started our business in the backyard with three kids. At one point we went two months without any income. We went through our entire savings to get our vision going. Three years later we moved into our own 6,000-sq ft facility, with over hundreds of people in our programs on a weekly basis. If we would have stopped when the going got tough, we would have never been going, anywhere.

There will be those select people who do get things the easy way. Be it natural-born opportunities or a natural-born gifts and abilities. They’ll frustrate you when they nail things on the first try. In fact, you may even be one of them. Know that it will only get you so far if you’re not priming and polishing your efforts with constant work and dedication. The cream of the crop eventually rises to the top in life from hard work, not from talent alone.

Take Michael Jordan for example. An iconic athlete, heralded as the best professional basketball player in the history of the NBA. Jordan won six national championships and six MVP titles during his stint with the Chicago Bulls. But the coolest part about his story is that he wasn’t always the top player. In fact, he didn’t even make the varsity squad during his sophomore year in high school. He began practicing rigorously to prove his abilities and make the team the following year. His gym coach said that he would find MJ shooting hoops almost every morning before school started, and had to ask him to leave the court almost every time to get to class.

He may have been talented, but Michael Jordan worked hard to build his basketball skills. It paid off. Eventually he earned the number-two slot on the list of top athletes of the century, only behind the legendary baseball player Babe Ruth.

Whether you’re flipping burgers, cleaning floors, working with people or computers, “Do it so well that the living, the dead, and the unborn could do it no better.” (Martin Luther King, Jr.)

Your efforts will be noticed when you least expect it. It will earn you team captain, first chair, the new job you want or a promotion in your current one. Even if no one notices, do it anyways. Work hard not because you want to impress people, or because you want to look good, or earn trophies. Do it because you know it’s the only way to reach your highest potential, and help others reach theirs too.

My dad’s hard work may not have been recognized by the Today Show, or the Nobel Peace Prize committee, or Men’s Health magazine. But it was recognized by us. We followed his example through what he did, not by what he said.

There will be so many times in your life where your mind will want to give up. You can’t let it. Your body will do it; you just have to keep pushing your mind through it.

But I didn’t, because I knew it would make me better. As long as you’re alive, you can’t quit. If you do, you’ll never find what you’re made of.

I have to point this out to ensure your priorities are in line with your values. Midnight shifts didn’t stop my dad from coaching our little league teams. Putting forth his maximum effort for eight hours on the clock didn’t zap his energy from being with us when he was off. Taking a promotion would have never happened if it meant a reduction from family time.

There’s a misconception in this culture that busyness equals productivity. The busier people are the more productive they feel. The sad thing is that many chase productivity as a measure of their selfworth. But being busy and being productive are not the same. Being productive means you’re producing something, or yielding or furnishing results. Being busy could mean you’re just occupying your time and using up energy.

Working hard produces; working a lot keeps you busy. You can produce quality work in a short amount of time. I always say, “Get in, and get out,” so you can spend time on what truly matters in life. There will be times when you’ll have to “provide” for your family, so work may take precedence over family time. But if you’re providing too much time to your finances and not to your family, eventually you’ll leave them in a mental, emotional, and spiritual deficit. That’s when it’s time to make sacrifices with work and material pleasures, in order to ensure your priorities are straight with your family ones.

What’s crazy about my dad’s story is that he didn’t have a dad to learn from. His father bailed on his family at a very young age, leaving his two brothers and his mother fending for themselves. He fought against many obstacles throughout his life. But it’s why he is who he is today—a dad than any child would ask for.

His principles and work ethic are part of a road far less traveled. Not many people will choose his route. But if you’re traveling the same way as everyone else, then you’re probably in the wrong lane anyways.

Life is not about you. Don’t run with the flow of traffic. For if you do, you may not necessarily get hit by a car, but you sure will lose quality of life.

I love you, son. I believe in you. Now get out there and work hard today. It’s an absolute game-changer.